OLVESTON & TOCKINGTON W.I. celebrates its Centenary this year. The first meeting was held on the 3rd September 1918 and the Church bells will be rung on Monday 3rd September this year to mark the occasion. We have also presented a seat to the Community which can be found outside Olveston Stores.

Our W.I. was formed only three years behind the National Federation of Women’s Institutes which celebrated its Centenary in 2015. We also belong to the Avon Federation of Women's Institutes which was formed in 1975 and which consists of 114 Institutes both Rural and Urban. The Federation is divided into several Groups and we belong to the Severn Bridge Group which consists of 6 W.I’s. The other members of our Group are Almondsbury, Pilning & Severn Beach, Compton, Bradley Stoke and Westbury-on-Trym.

The Organisation has seen many changes over the years and it is interesting to see that we now have many younger W.I.s coming into being in the urban areas. The W.I. has definitely moved with the times and is flourishing with approximately 222,000 members.

At local level, our monthly meetings are held on the 2nd Tuesday of each month in the Olveston Parish Hall at 7.30 p.m. Invited speakers talk about a wide range of topics from Health, Travel to Entertainment. The remaining evenings are taken up by social evenings such as an American Supper and an Annual Dinner at a local hostelry.

Within our Institute, there are various smaller groups which take part in such activities as Skittles, Table Tennis, Craft Club and Book Group. We enjoy going on trips to places like Aerospace Bristol which houses the last Concorde to fly, Nature in Art, The Royal Mint, Bletchley Park, and Blenheim Palace to name just a few. 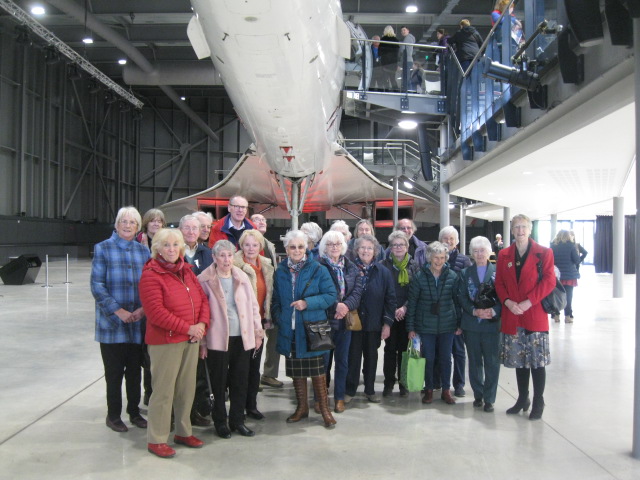 Details of upcoming meetings are regularly published in the Community Magazine, Meeting Point
and we also put a report of our meetings in the Thornbury Gazette.

The W.I. is only as good as the women who join and it has therefore always put a great deal of importance on being a welcoming organisation. We have been told that we are a very friendly bunch so, if you feel like coming along, we should be very pleased to see you and you will be made most welcome. Try us out as a guest for up to 3 visits.