Littleton is in United Benefice with Alveston and Elberton and so we share our services and personnel but there is always a church service being held every Sunday within 3 miles distance. People are always welcome to join any of our services or special celebrations.

One Sunday every month: Matins

One Sunday every month: Communion

Times of Services for St Mary de Malmesbury, Littleton on Severn are listed at the back of the community magazine, Meeting Point, each month.

Our P.C.C. members are: Lyn Carnaby, Maureen Moras, Tim Pyper and Carol Watkins, together with our Churchwarden, Frank Walters (412531).

The existing church in Littleton is first mentioned when the Abbot of Malmesbury held an annual Court Leet here under a licence granted to him by King Edward the Martyr (975-979). (Malmesbury Abbey is one of the oldest in the country and dates from 680AD.) In the reign of Ethelrede Unrede (979-1013), half-brother of Edward, a grant was made to his thegn, Wenoth, of a parcel of land valued at five hides, named Lytletun. The document was signed by Dunstan, Archbishop of Canterbury, Oswald, Bishop of Worcester and many other bishops, earls and thegns. Its boundaries were delineated then, and are still recognisable today. A copy can be found in the British Museum and a translation by Dr. G.B. Grundy in "Saxon Charters and Field Names of Gloucestershire".

In the Domesday Book compiled in Gloucester in 1085-1086, it states that the Church of St. Mary de Malmesbury, Littletona is in the Langlei hundred, having a priest and thirty acres of meadow.

By the 12th century, the original wooden church was replaced by one of stone. The font and piscena near the altar date from that period. Around the font are a number of heraldic encaustic tiles retrieved from the ruins of Thornbury Castle in 1521.  During the rebuilding of the church wall in 2006, some fragments were discovered that had been discarded by the 16thcentury builders. The tiles illustrate symbols from Edward Stafford, 3rd Duke of Buckingham's family. A more detailed account of these tiles and the history of the church is being re-written. 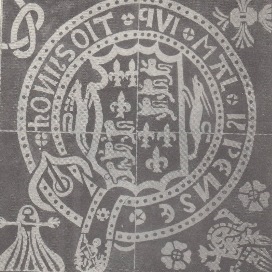 A picture of one of the heraldic floor tiles near the font in the Church of St. Mary de Malmesbury, Littleton-on-Severn. The tile shows the arms of the Duke of Buckingham and was one of a number of such tiles rescued from Thornbury Castle in 1521, after the execution of Edward Stafford, 3rd Duke of Buckingham.

There is a lot of oral history about Littleton upon Severn Church and village. One tradition states that a footpath exists between Littleton and Malmesbury Abbey which the monks used when visiting the church to take the Eucharist three or four times a year. People in the parish are intending to plot and walk this route. One monk in particular met a sad end when he was hit on the head and murdered and the chalice he was carrying was stolen. A well nearby in Hay Wood was supposed to have run red as blood.

Another story tells of a tunnel existing between Rock House Farm and the church that was used during the Reformation in the 16th century, when Littleton remained secretly Catholic for a hundred years after the rest of England. The stone church has fallen down at least three times during its long history. During one of these periods of neglect, the local Quakers looked after any valuables the church had for a hundred years, until the parish had enough money and manpower to rebuild it.

Small nibs can be seen around all the windows in the church where blackout blinds were secured during the 1939-1945 World War. Candles would have been still in use then, as the village didn't have electricity or piped water until 1954.

When the Rev. Norman Spencer was Priest in Charge in Littleton, he brought the altar candlesticks, altar cross, book stand and credence table to Littleton in 1968 from the Royal School for the Blind in Henleaze, Bristol, prior to its demolition in the 1970s. The Rev. Spencer had often taken services in the School Chapel.

Although Littleton upon Severn is a small hamlet of 60 houses and 150 people, the community worked together to raise the money to re-roof the church in 2004-2006. Five carved stone crosses on the roof and tower were replaced. The overall fabric of this Grade 2 listed building and its graveyard is kept in good order by a dedicated and supportive village.